LESSON 10
POSING FOR THE MUSCULARITY ROUND OF JUDGING

Unlike the symmetry round, bodybuilders have more latitude to present their physique during the muscularity round. Studying magazines, videos and attending bodybuilding contests will give you an idea of the various and slight adjustments competitors make to their leg, torso and arm placement in each compulsory pose – to either hide a fault or accentuate an asset.

A warning here, do not make your adjustment so grand that it is difficult for the judges to compare your physique with the other competitors. Such unique poses can be kept for your individual posing routine.

Initially practice the compulsory poses in front of a mirror until you can do them correctly. You should also notice the “feel” of each pose – biomechanically “feel” your arm and leg positions. When you are competing on stage, you must rely totally on the feel of the pose. Therefore, once you have your poses refined, practise often without a mirror. Ask others to critique you, ask them what they like and do not like about each of your poses and correct that which “doesn’t seem right”. Everyone has an eye for detail, art or beauty, so you do not necessarily need anyone experienced in bodybuilding to tell you if a pose either looks good or has faults. Of course, having experienced people help is great. But, it is not a blocking stone. Have confidence in what you see and your own opinion. I have heard in the crowd a novice competitor’s grandmother (at her first bodybuilding contest) verbalising who she likes and why – and pick the placings right!

Tip: Video tape yourself performing your poses. We are our best (and worst) critics, so you will find no better way to correct what you are doing if you watch yourself.

A key to successful preparation with your posing is to be aware of these two small but vital points:

1. There will normally be seven judges assessing the contest and they will be sitting across a space of approximately seven metres (@20 feet). Therefore you must rotate every pose so the judges sitting on each end of the judging table can see each pose at its best. Do not hit static poses during the compulsory rounds. Rotate all your compulsory poses – start doing this during your practise time in front of the mirror and video camera.

2. Most stage heights are one metre (three feet), so when a judge is seated, their eye-level will be at your toes. Direct your poses downward, lean forward in the front-on poses and when you perform the rear double bicep and rear lat spread, arch your lower back and lean backward to angle your body better for the judges seeing you from ground level.

For organizations around the world there is probably a consensus on seven compulsory poses judged in Bodybuilding divisions:

3. Side Chest (either side at the choice of the competitor)

4. Side Triceps (again, either side)

Additionally, the organization may ask for further poses, such as:

You certainly need to check with the competition organization to get their list of poses for your category. Females typically have less poses because some mandatory poses, like the front lat spread, do not show enough muscularity on (most) female competitors for it to receive the classification of a ‘compulsory’ pose.

To break a tie on a particular judge’s score sheet, the judge may specifically request a competitor/s to show any compulsory pose, at any angle or side. So practise the Side Chest and Side Tricep pose on both sides of the body. More so, a judge can ask for a comparison and select a particular muscle group, like “Gimme your best calf pose.” Some requests can take you by surprise (Eg. Show me a forearm shot – with your arms over your head). Never show your disapproval or confusion – stay professional and quickly make a contraction that will make the muscle respond!

This is the first pose the judges see. It is the most important pose. The judges will be hoping the competitors confirm their placing “predictions” – so they can put their pens down and relax. It is also the measure of the Number One muscle group – The Biceps – the hallmark of a bodybuilder. Therefore, if it is your best pose, relish the time and milk the pose for all it is worth. If it is a poor pose for you, even after making adjustment and movement to hide your weakness, hit it fast and move on. By striking the pose, rotating to all the judges then quickly breaking the pose – you may be able to control (reduce) the time other competitors have for displaying the pose. If not, start creating some movement in the pose, do not flutter like a featherless bird, but do take the attention away from what you are lacking.

As the picture demonstrates, males usually stand with legs straight and flexed, while females put one leg in front to accentuate the curvature of the body. Now inflate your chest, taking a deep breath and raise your arms to flex the biceps. 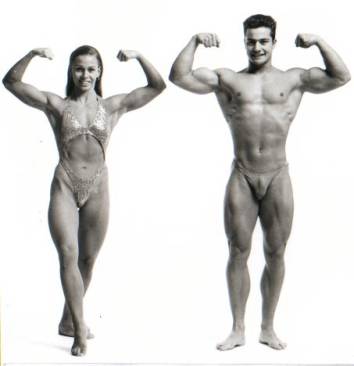 Variations in this pose: 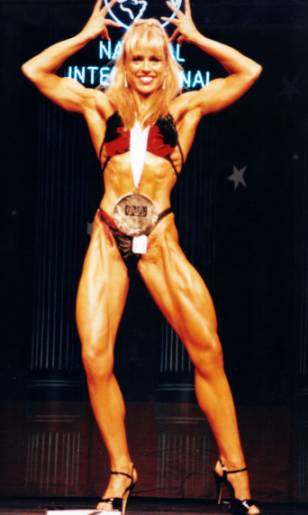 Ms Figure competitors keep their hands “open” during the muscularity poses. The elbow and arm position is noticeably higher because judges do not want to see a large degree of muscularity; rather they want a nice flow of the body and sleek arms. The leg position can also vary much more than with the bodybuilders because the judging emphasis is on an aesthetic shape rather than comparing ‘muscle with muscle.’ Ms Figure competitors often place one leg out to the side to either hide thick legs or extenuate their shape. Alternatively, they can position one leg in front, actually crossing across the body slightly, to create an hour glass profile and curving shape.

For this pose flex your legs and place your hands around your waist just above the hips. The trick for novices when striking this pose is not to let your oily hands slip off your waist like you are Jet-Lee throwing martial art star blades. To prevent your hands slipping from their position start with your palms facing downwards and hook your thumbs around your waist, at the top of your hip bone and push your fists into your body. For those with a poor back development, but good (flexible) scapula structure, push your grip inwards, take a deep breath and raise your shoulders as if shrugging. Just the spread of your scapula will make you look wide. If you do have good back development or a narrow back, do the opposite, push your shoulders down and pull your elbows forward, spreading the muscle mass and scapulas wide. Either way, the idea is to use your hands to make your waist smaller and the barn doors (lats) wider. Ms Figure competitors and even female bodybuilders are rarely required to perform this pose. 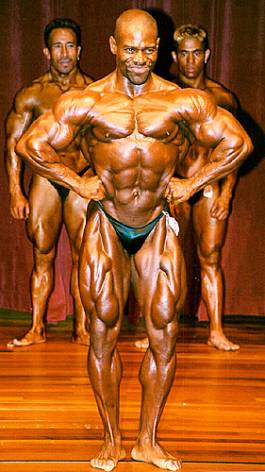 Side Chest Pose – any side

In this pose the leg facing (front) the judges will have the toes next to the ankle of the rear leg. Elevate your front heel and flex your calf and tense your thighs to show the fullness of the upper leg and calf. Place one hand over or near the wrist of the other hand while standing side-on to the judges. Take a deep breath to inflate and elevate the chest. Flex to display the muscles of the chest and arms. Remember to keep the shoulders rolled back. This a great pose to manipulate. There are many changes to the angles of arms to make the pose more effective for you. Plus, use the compression of your body against your arms to make them more muscular and alternatively use the compression of your arms to make your chest better. 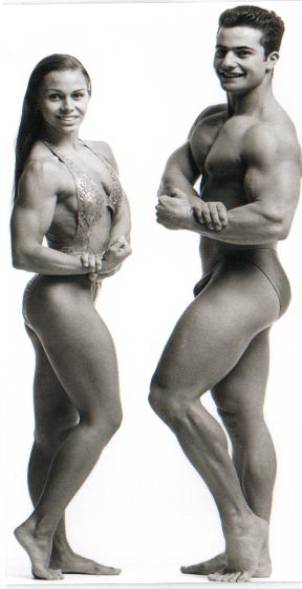 Side Tricep Pose – any side

With this pose place your legs in the same manner as the side chest pose. Now place your hands behind the body and grasp the wrist. Take a deep breath to fill and elevate the chest and roll the shoulder back. At the same time squeeze the (arm) tricep against the body to both flatten and add size to its appearance. Practise rotating the arm in different directions which will create differing tensions to the various muscles of your arm (tricep/bicep/delt). Choose the angle that makes the arm most muscular. Note: this pose does not have to relate to the triceps at all – that is just the name of the pose. Your aim is to make the whole picture as muscular as possible. Also try tilting your hips higher on the side facing the judges, so when you crunch down and flex the mid-section, your obliques will be more pronounced. 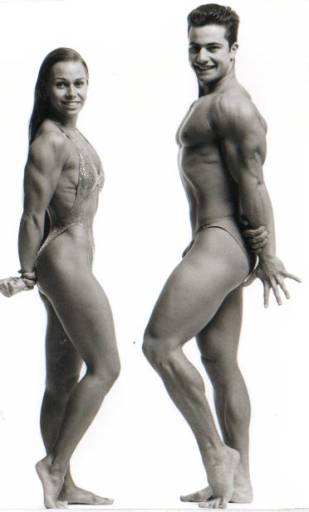 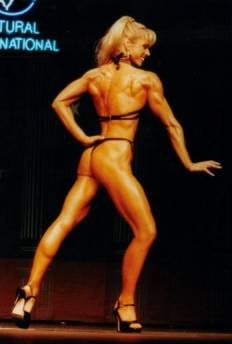 Ms Figure competitors can perform the bodybuilding style but they have more freedom in their posing. Another popular option of showing the triceps is in front of the body. In this position, the Ms Figure competitor can display her back and glutes!

In the rear double bicep pose you must have your calf flexed. Place one leg back and tense the calf and hamstring. If you have equal development in both legs, on the next rear pose (rear lat spread) change the leg you put back and flex. Judges will note the accomplishment. Lean backward to angle yourself towards the judges. Flex and crush your back by bringing your elbows slightly back and your wrists back even further. Your elbows should be more frontward (away from the judges) than your hands. With your spine rounded, your shoulder blades should be spread and your back muscles should be flexed. To really bring out the lower back, tense your abs. I like to see a competitor turn their head and look at one bicep, if you have a great bicep peak this will focus attention on it. Plus, seeing part of your face is better than seeing the bald spot of others. Not to mention, it can bring out some striation across the top of your back. When you are doing a lat pull down in the gym, just imagine you are hitting the rear double bicep as you pull the bar down and likewise on stage duplicate the feel of a lat pull down and bring out the muscularity. 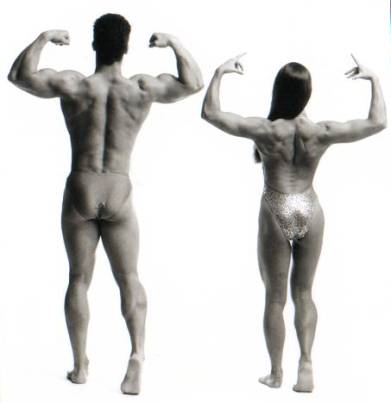 Again, this rear pose is conducted displaying one calf flexed. Lean slightly back to show the full width of the upper back whilst highlighting the lower back as well. Start this pose by circling your straight arms around behind you, crunching your back. This is a good pose for the Gregory Peck’s (great actors) of the sport. Then slowly and dramatically spread your wings to full extension. 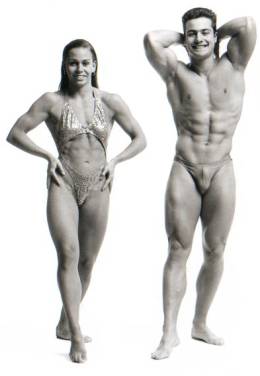 Place one leg forward whilst flexing your thigh to show thigh muscularity and definition. Place your hands behind your head or neck with elbows slightly upwards. This will automatically stretch the abdominals. Squeeze and crush from side to side, as this will accentuate the obliques.

Alternatively, place your hands on your hips and tense your arms. Take a deep breath and suck in your stomach, then exhale and crush down on the abdominals to bring out the definition.

This concludes Lesson 10 — Posing For The Muscularity Round Of Judging from the IAPC Certificate In Bodybuilding Contest Preparation Course. We hope and trust you have enjoyed this small sampling…which is about 10% the size of the comprehensive 347 page course…and covered just one lesson from the course. There are 20 more complete lessons (including three more posing lessons) to be found in the course…and we encourage you to visit www.bodybuildingcourse.com now to order the full course.